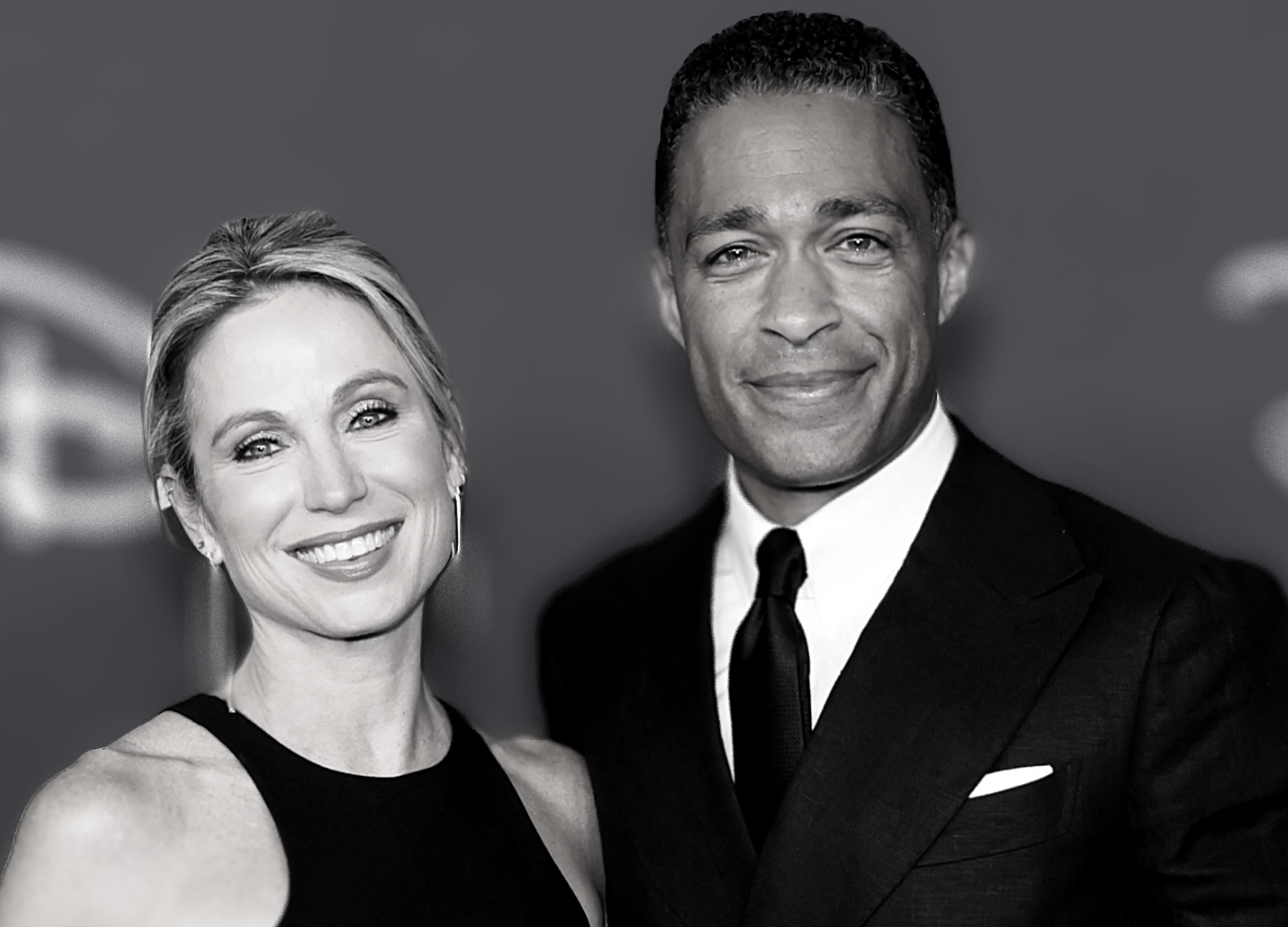 According to People Magazine, the relationship between T.J. Holmes and Amy Robach was no secret to their colleagues, as they were flirtatious, and those who worked with them felt uncomfortable.

According to PEOPLE magazine:

MARRIAGES IN VULNERABLE STATES ARE MORE SUSCEPTIBLE TO INFIDELITY

Before worrying about your spouse falling in love at work, let’s take a closer look at the precursors for the vast majority of infidelities.

The intimate bond Holmes and Robach had with their respective spouses appeared to be in decline before the affair started. Notice that I didn’t say they had a ‘bad marriage’ but rather that their intimate bond had weakened. It’s a subtle but significant distinction.

Working closely with an attractive colleague does not automatically stir romantic feelings. And if romantic feelings are stirred, it should not be assumed that they will be acted upon. Married persons that develop a relationship outside the marriage are likely to be in a relationship where the intimacy bond is not as potent as it needs to be. Powerful attachment bonds, while not a guarantee, help assure fidelity. Bonds, whether the mother-child bond or the romantic bond, are protective. When bonds are strong, protection is high.

Keeping that in mind, let’s look at this report on Robach and Shue’s marriage by Yahoo! Life:

Yahoo! Life and Newsweek have reported that there were indications that T.J. Holmes’ marriage was also in a weakened state.

These news reports give the public a small peek into the difficulties in both marriages long before the story of the affair broke. Most people focus on the drama and betrayal of the affair but fail to consider or examine how fertile the ground for infidelity becomes when bonds of intimacy weaken. There are predictable precusors to infidelity.

THE PURPOSE OF MARRIAGE: A RELATIONSHIP FOR EMOTIONAL AND SEXUAL INTIMACY

A marriage—which is a romantic relationship—is a uniquely intimate bond. It is unlike any other close relationship. Emotional intimacy combined with sexual intimacy is a potent mix. While you may have a close relationship with a sibling, friend, parent, or family member, you are not sexually intimate with them. The potency of a marital bond is the profound mix of emotional depth and sexual sharing. Put another way, profoundly engaging the emotions, the body separates the marriage bond from other close ties. The mother-infant bond is as profound as the combination of emotions, and the body is the mother-infant bond. When the maternal-infant or romantic bonds are solid, protective boundaries develop. The protective layer weakens when the bond does not form properly or weakens.

IN THE BEGINNING: THE BOND FORMATION

When a couple falls in love, they begin to form a powerful, intimate bond with one another. Driven by physical and emotional attraction, this bond has two components. One part consists of emotional intimacy, and the other is sexual intimacy. These two parts work together, in unison, with one part impacting the other.

Married pairs must continuously nurture these two parts to maintain this delicate and fragile intimacy bond. Doing so helps assure fidelity. In effect, the role of the intimate partner is to help ensure that your partner can easily connect with you emotionally and sexually.

When the couple connects profoundly and intimately in both an emotional and sexual way — and it’s mutual, dependable, and consistent — the relationship is strong. The protection level is high.

INSERT AFFAIR-LIKE ELEMENTS INTO THE MARRIAGE FOR A STRONGER BOND

A sexy, romantic, and intimate marriage contains ‘affair-like’ elements. Couples’ relationships should include frequent flirty, fun, sexy, affectionate, romantic, emotional, and sentimental exchanges. Couples who are intimates and lovers and prioritize their relationship above all else tend to fare well.

A romantic relationship that is more friendly, cooperative, and pleasant -lacking affection, emotional engagement, and sexual connection – often flat-lines. Partners and spouses become friend-zoned. A relationship that becomes duty-filled or task-driven is not a romantic one. All too often, couples fall into the living-like-roommates syndrome or start behaving like household co-managers. These highly efficient but intimacy-lacking relationships tend to show cracks in the foundation.

Think about affairs for a moment. They are often high-octane, sensual, fun, sexy, and intense. The sexy-flirty-fun switch on high volume. This way is how relationships tend to be in the beginning. It’s safe to say that affairs and early romances have these sexy-flirty-fun-exciting and close ways. Intimate partners need these experiences throughout the relationship as it is a type of bonding glue.

Relationships need this kind of juice for the parties to bond, attach and stay loyal. It’s critical to include these elements throughout the entire life of the marriage and not just in the beginning. Consider the grandma and grandpa who still can’t keep their hands off one another! Without these aspects, the bond weakens or breaks, and the much-needed sexy-flirty-fun-romance is more likely to get outsourced.

Conflict is not inherently detrimental to a relationship. Research shows no direct correlation between marital conflict and marital satisfaction. Instead, conflict is a sign of being engaged and invested. It conveys to the spouse or partner that they matter to one another and are impacted by what the other one says or does.

Disconnecting, checking out, shrugging shoulders, and turning away are more concerning than conflict. Emotional engagement is needed to keep a strong bond. This engagement includes a willingness to step into the ring and fight for one another and the relationship. Conflict screams, “I matter, you matter, and our relationship matters.”

As a couples counselor who helps couples rebuild after infidelity, I can assure you that a common trait is that many are conflict avoidant. They were fearful of engaging in complex matters and expressing stronger emotions. Avoiding conflict is common in relationships that experience infidelity.

When couples cease to engage in deeper sexual and emotional intimacy, their relationship becomes conflicted, distant, or both. A painful disconnect can unfold. It can result in a partner feeling uncertain and concluding that they are unloved and don’t matter to their partner. Feeling alone, insecure and unloved, they are vulnerable to gravitating toward the attention and responsiveness of someone outside of the primary relationship or marriage. These are often the pre-conditions that ripen the possibility for an affair. Infidelity is not random.

Signs that show that the intimate bond between a husband and wife is in decline are when they disengage from one another. It’s not that disengagement directly harms the relationship but rather the inability to repair and reconnect following the disconnect. Of course, all couples have times when they feel distant from one another. But those who can restore and reconnect fare better. It’s not just a matter of ‘resolving the conflict’ or ‘fixing the issue.’ It goes deeper than that. It’s genuinely feeling closer and more intimate after sorting matters out. More than just finding a solution to the presenting dilemma, the connection is restored and the relationship repaired. When this happens, a couple can feel closer, more connected, and more understood following a fight.

After researching this story, it is clear that the marriages of Amy Robach and T.J. Holmes were in weakened states. Therefore, it does not follow precisely that an affair was inevitable because their marriages had difficulties. However, knowing that both Amy Roback and T.J. Holmes were in marriages in which the bond was in decline suggests that the conditions were ripe for each of them to be receptive to the advances of the other. Conversely, had one or both been in marriages with a robust intimate bond, their union may not have formed.

Helping individuals and couples restore and deepen connection since 2012.

Since 2014, Jersey Indie has been dedicated to showcasing and promoting all things independent and born/built in New Jersey. During the COVID-19 pandemic, they expanded their coverage to include...

We've all seen the magazine headlines, celebrity gossip stories, politicians who cheat and have listened to the experts that portray infidelity in trite and predictable ways.  Our culture...

What is a couple to do when infidelity occurs before getting married? Mayi Dixon, LPC host of Anchor's "The PreMarital Bliss Podcast" interviews relationship and couples counselor Terri DiMatteo....

Infidelity is a relationship trauma that hurts. Affairs require lies and deception to occur. The paid and suffering in the aftermath lingers a lifetime. With all of that, is there anything about...

Everyone knows someone who has been impacted by infidelity. It is such a prevalent reality in our society, yet there is still so much taboo and limited understanding in the way that we talk about...

Did your partner cheat on you? Are you sure? Does one of you think the other one cheated, and you can't agree that cheating has taken place? Which behaviors constitute infidelity? Is kissing another...

The Complex Challenges of “No Contact” With the Affair Partner

The first task in affair recovery is to fully and permanently conclude the relationship with the outside party or the affair partner. Full affair recovery cannot truly occur while a spouse or...

Why Do People Have Affairs? The Answer May Surprise You

Many notions about why people have affairs suggest an evolutionary predisposition, that partners who stray are immoral individuals without conscience or that society and culture are to blame....

INFIDELITY SPOTLIGHT: WHAT CAN HAPPEN WHEN AFFAIR PARTNERS GO ‘NO CONTACT’?

Bill and Jayla have just entered marriage therapy after Jayla discovered Bill’s affair with Sarah. During their first session, the therapist tells them that part of the affair recovery requires...